The Axis Mundi - the "axis of the world" - is often seen as the World Tree, the giant metaphysical tree that is thought to stretch between the three worlds, connecting and supporting them. Its roots reach deep into the underworld, its branches hold up and stretch through the heavens. The physical plane, where we live our lives, expands out around the trunk.

It has been said that only two Earthly creatures have access to all three realms - trees and humankind. The difference between a tree and a person, of course, is that people are not physically rooted and can move around. We can do work in this world. While the trees mediate energy between the realms above and below, we have the unique gift to not only mediate those energies but to channel them and put them to use here, in the physical.

One of the easiest ways to work with this concept is through a grounding meditation. Most people reading this will probably know one or more ways to ground already. Through this type of meditation you can access the power of the worlds below and above and draw them into you. My version of the grounding meditation also combines these energies and helps you to use them. Below is a simplified version of this meditation. While this visualization seems very "nice," there is a lot going on here, which will be explained below.

Stand or sit upright with a solid but relaxed posture. Breathe slowly and evenly, in through your nose and out through your mouth. Allow your thoughts and emotions to settle.

Imagine that a red cord begins to extend down from your root chakra on your exhale, burrowing easily into the Earth. Every exhale sends the red cord farther down into the Earth, through all of her many layers. Take as much time as you need with this, sending your cord down and down, until finally it encounters and dips into the glowing molten core of the planet. Feel the hot, red, liquid iron at the center of the Earth begin to draw it up through your red cord on each of your inhalations, as if you were sucking it up through a straw. Let it rise into your body, filling you completely. Every muscle is warmed and relaxed by this iron Earth energy. Every cell is revitalized and energized.

When you are as full as you can be of the red energy, imagine that your crown chakra opens up. A white cord extends from there, up into the sky. Just as you sent the red cord down, send the white cord up now, higher and higher, out into space until you find it up amongst the stars. Allow your cord to grow until it touches one of those stars, shining brightly with pure white light. When you are ready, draw white starlight down through your white cord. It moves quickly and easily towards you, rushing like a waterfall. Allow it to fill you from the crown of your head to the soles of your feet, just as you allowed the iron energy to fill you before.

Finally, gather both the red energy from below and the white energy from above at the same time. Pull them into your heart center and allow them to blend. They swirl together. They form a soft pink light. Know that this light is balanced and healing, containing the energies of the underworld and the heavens, of the stars and the Earth. The light spills out of your heart, filling your entire body. It continues, radiating out into your aura, cleansing it and strengthening its edges. And it flows out even more, moving out all around you, blessing the space you occupy.


The underworld is the world of our Ancestors and the Fay, and it where our Shadow dwells. It's sometimes called the "causal plane." While we live in the realm of effect, the underworld is the realm of cause, and the beings there have influence over the patterns of energy that will eventually rise up into our world as things and circumstances. If you think about who our Ancestors are, they are the ones who have formed us - through genetics, through their actions, through their creations, and through their ideals.

Our child/animal nature is also connected to the underworld, and by drawing up energy from there we connect with our most innocent - and our most carnal - aspects. The Shadow, which is made up of everything we've denied or buried about ourselves, is also thought to live in the underworld. Whether this means some shared underworld or a personal underworld (the subconscious mind) is debatable, and really irrelevant. Living in the underworld, our Shadow has power over the causal patterns that eventually manifest in our lives. This is why an unexamined Shadow can cause so much havoc. Connecting to the underworld through grounding can be a first step in preparing us for the journey towards reintegrating parts of Shadow - a journey that all serious spiritual seekers must eventually take.

The heavens or the overworld, on the other hand, is the world of our Gods, Guides, and Guardians. It is also where we find our "higher self" (or Godsoul, Holy Guardian Angel, Christ Consciousness, etc.). If the seeds of cause get planted in the underworld, it is the light of the heavens which they grow towards. The heavens are concerned with the big picture, the grand design, the cosmic cycles. We are cogs in a machine which is a cog in a larger machine, according to the heavenly point of view. "The needs of the many," the power of time to render small moments indecipherable from one another, the beauty of the spinning of galaxies... these are the powers we connect to above.

On their own, either of these principles are incomplete and potentially dangerous. Without the heavenly influence, the underworld power would make us self-centered, self-righteous, and self-serving. Without the underworld influence, the heavenly power would make us indifferent, dispassionate, and unfeeling. But together, in balance, compassion emerges. Curiosity is met with knowledge to breed wisdom. The whole is protected while the individual is still honored.

Yes, we need access to all of the realms, to all of our parts. And once we have accessed them and remembered their meaning, we can use those powers to shape the world around us by acting in right relationship to it.


*Yeah, I don't speak Latin. Google Translate and an online Latin dictionary helped me determine that "vobis" might be the best word here. If you do speak Latin, feel free to let me know if there's a more appropriate way to express this concept.
Posted by Jonah Dove at 3:59 PM 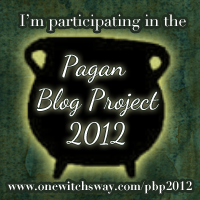